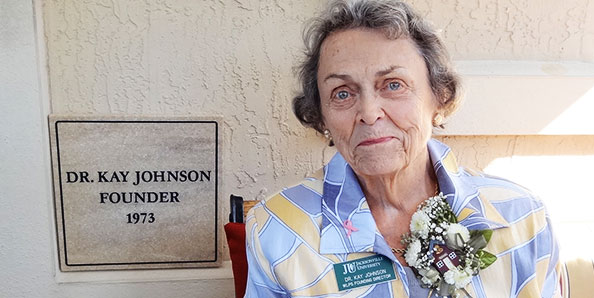 In 1973, The Florida Legislature mandated that in order to teach one of the newly installed kindergarten classes, a teacher holding an elementary teaching certificate would need six semester hours of Early Childhood Education.
Jacksonville University offered the first Early childhood Class in Duval County in the First Summer Session, 1973 (EDU-421-G). Most of those enrolled were upper grade teachers (3rd-6th grades) who wanted and needed experience with young children.

Parents asked that the school continue into the fall and agreed to pay tuition to support a teacher. A session for two year olds was added.

In 1985 Jacksonville University needed the Little People’s School space in Founder’s Building for Information Technology. The school moved, for one year, to a classroom in Council, C-101. It also had the use of a nearby conference room.

In 2002-2003 the location of The Little Red Schoolhouse was needed for the new Davis College of Business. The present outstanding Wilma’s Little People’s School facility was ready for occupancy in 2003.

For over 40 years Wilma’s Little People’s School has been a part of the unique experiences offered by a generous Jacksonville University community-the administration, faculty, staff and students, plus a caring and attentive parent community. This has always provided a strong support system. Such support has made it possible to survive, thrive and offer a developmentally appropriate education choice for two, three, and four year old children. Wilma’s Little People’s School has an amazing group of “alums”!